Sort by: Date posted name There's a total of 576 posts in the news archives
Beginnings of Zoo
I streamed the making of a new Sofi character portrait yesterday. There's no color or details yet, just the basic outlines.

What do you think?
I'm going to have to fix all of these up real quick since I need the new skincolors for all of 'em in the story bits in that Ellie flash I'm working on.

I also streamed saturday, and I made some progress on Zara. She's almost done, I still probably need to make some tweaks to the lips. Also, don't mind the facial expression on the clothed version, I made it like that on purpose since it looked so funny. I shall change it later.

It's starting to shape up, ya?
We'll see what I shall stream next. Maybe some lipsync stuff?
Posted 18th of February 2019 - 03:20 by | 6 comments.
Better Zara?
I listened to your feedback and asked a friend to help me out with the problematic areas. Hopefully this looks a lot better! I also streamed the process of adding clothes to her just before I wrote this update, too. They're not completely done yet, but they're close to. Just need to add a few more details and shade 'em.

I had a bunch of drawings sketched up, but I spent most of tonight streaming so I couldn't finish any.
But I did get a few bits of fan art! So let's go through them before I head to bed!

2 Cats 3, Zu and Zoo find themselves in a sticky situation.
Zu Titties, it definitely is. Drawn by Oni Garth!
Ellie Drawing, a nice Ellie drawn by Ledgy!
Zara in Peril, this piece is part of an art trade!

Hey what do you know, all 4 main girls got a piece of fanart this week. That doesn't happen often!
I'll probably stream again this upcoming saturday. Not sure what yet, but if I can't find something else, it'll probably be the continuation of the Zara character portrait!
Posted 11th of February 2019 - 03:04 by | 9 comments.
Changes to Zara & other things
Got a few things to mention today! First, Zara! I've made a new nude model of our favorite butt enthusiast, featuring a new skintone and some changes to her hairstyle. Take a look and lemme know what you all think! I'm pretty happy with it so far.

I got some regular arts to show too, a commission, an art trade and a joke image.
Shackled and Exposed, Zoo being afraid of what's about to happen to her tiny, unprotected butt! (Buy your Rear Guard today!)
Tera, Zu and Dog, further Tera Shenanigans...
Giantess Sofi, I drew this in MS Paint. Shrapnel thought something else I sketched was a giant Sofi in a door frame, so I made this version to mess with him.
The fun thing is I could think of a million things a giant Sofi could do...

And a piece of fanart!
Sailor Couple, I missed to post this a while ago when I received it! It's part of an art trade, too.

The Ellie flash is coming along nicely, I think. There's still a bunch of stuff left to make, including the joy of adding voice and sounds to it. Unfortunately the VA I was hoping to voice Ellie has caught a cold so I'll have to wait for her to get over that. There's quite a bunch of other things to do to fill out the time, though... Most of that time will go towards making a introduction comic similar to the Red Riding Zoo Reskin I made a while ago.

And since we've reached our $500 goal on Patreon, I should start doing some of those art streams again. Maybe I could stream the progress of that. Either that or I could stream the making of the clothed versions of Zara. I might give it ago this weekend, we'll see what it'll be then. I just have to figure out how it works again, I've forgotten, hoahoa!
If you're interested in watching, either follow or check out RC on Picarto on saturday or sunday.

The second shared $500 goal I had on Patreon was to get that Ellie tribe comic done digitally! Since I'm godawful at digital art myself, at least when it comes to anything more complicated that simple flat colored drawings, I've asked GBlastMan to help me out with finishing it. He'll be tracing my outlines and coloring it under my supervision, and so far we've got a preview of a page 1 up for patrons.
Check it out here!
Once the page is colored and finished, I'll post it here on RC.se.

Well, I think that was all I had to say today. Now it's probably time for sleeping for an RC. Good night to you all!
Posted 4th of February 2019 - 01:16 by | 18 comments.
Furtherer skintones!
Hello again! I'm back with some new arts to show off!
Fast Bunny, a commission I drew. I don't usually do 'em, but eh.
That's all I drew, really. Mostly been focusing on flash work.

There's some fanart though!
2 Cats 2, which is a follow up to Zoo and Zu in the monster pit. Once again drawn by Bumblebotb18.
Wendys Zoo, which features Zoo dressed up like that brand mascot! Drawn by Oni Garth.

I took your feedback into consideration and made Ellie's skintone much more subtle. I think it looks a lot better now.
The dudes over at the discord says it looks swell as well, so I hope the rest of ya will be satisfied too!

And I also made an underwear and new work clothes version for her as well.
Ellie in her underwear.
Ellie in her working clothes.
Looks much more professional like this, me thinks. 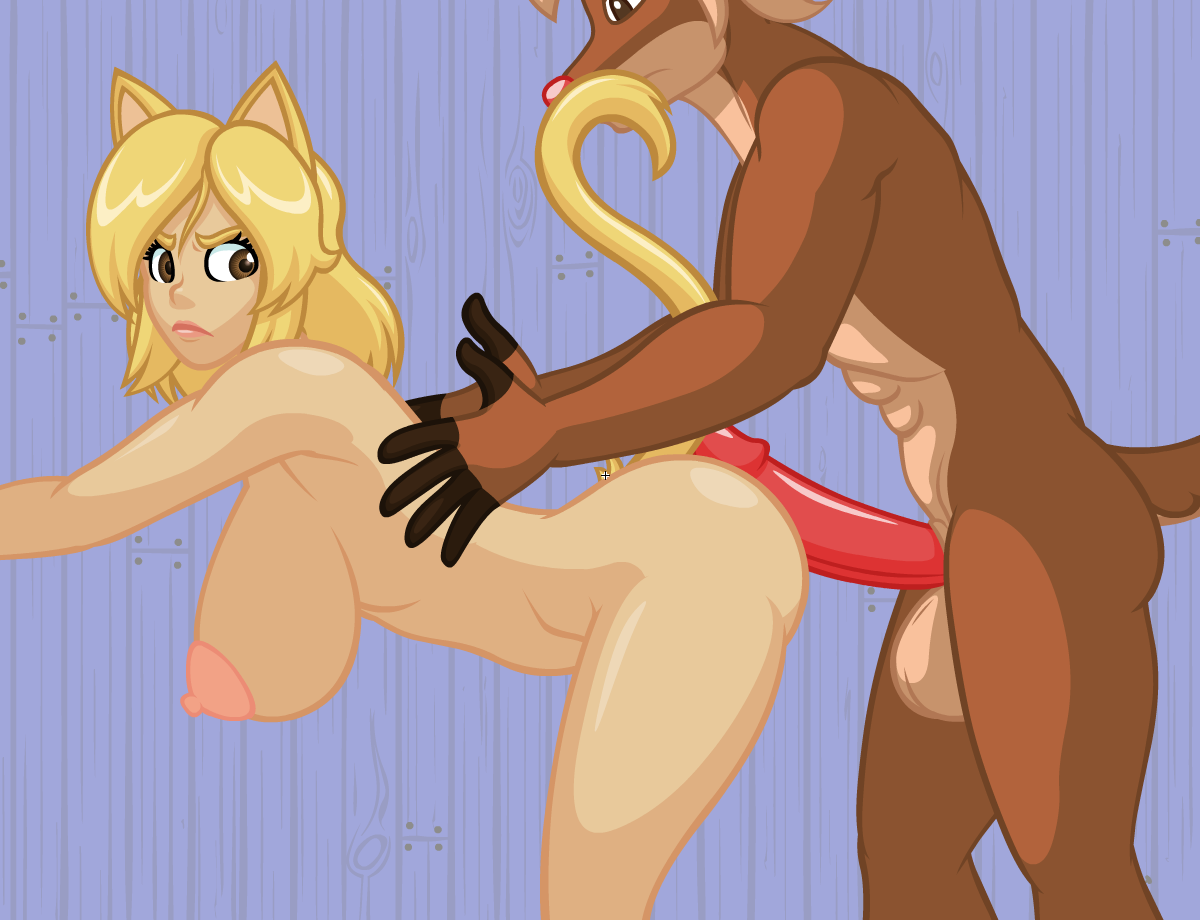 And this is how the flash looks with Ellie's new colors.

I've finished the base animations now, so it's all the fluff and details that need to be added in now.
I'm currently writing up a little tie-in story for this thing, which hopefully will make it fun to play even though it's going to be a rather short flash. I think the different endings in Spectacular Spectrophilia was pretty popular, so I'll probably do something similar if possible.

Well, as always I'd like to hear what you think. I might be bad at responding to all of your comments, but I do read every single one.
Posted 20th of January 2019 - 22:04 by | 45 comments.
Music and further skintone changes
There's been a few people asking where to find the main song in Spectacular Spectrophilia. The answer used to be nowhere, but now I've uploaded the music to the music tab! It's been updated with an intro and an end, too.

Listen to it here!
The track was made by tdot.dot here on Soundcloud, big thanks to him!

I've also tweaked Ellie's skincolor a whole lot, with the help from a bunch of friends. Hopefully this should be a lot better and less banana-colored!

Next up is going to be Zara... I don't think I should run into too much trouble with her.
Posted 13th of January 2019 - 12:25 by | 23 comments.
Looking Forward
With Spectacular Spectrophilia all done and released, it's time to look forward! It feels very uplifting to have this off my mind, I tell you. The reception seems to be mostly positive as well and that helps too! A lot of confusion regarding the good and bonus endings, too, while others managed to find it on the first try around. Amusing how that works, hoahao. I also hope you've enjoyed how expressive Lollo can be. We had quite a bit of fun with them in the discord server!

Well, with that out of the way and computer parts still on their way, I'm going to focus on something you might recognize from way back. I've been working on it to and fro, but now that I've collabed with a coder we are going to try and do something nice out of this: 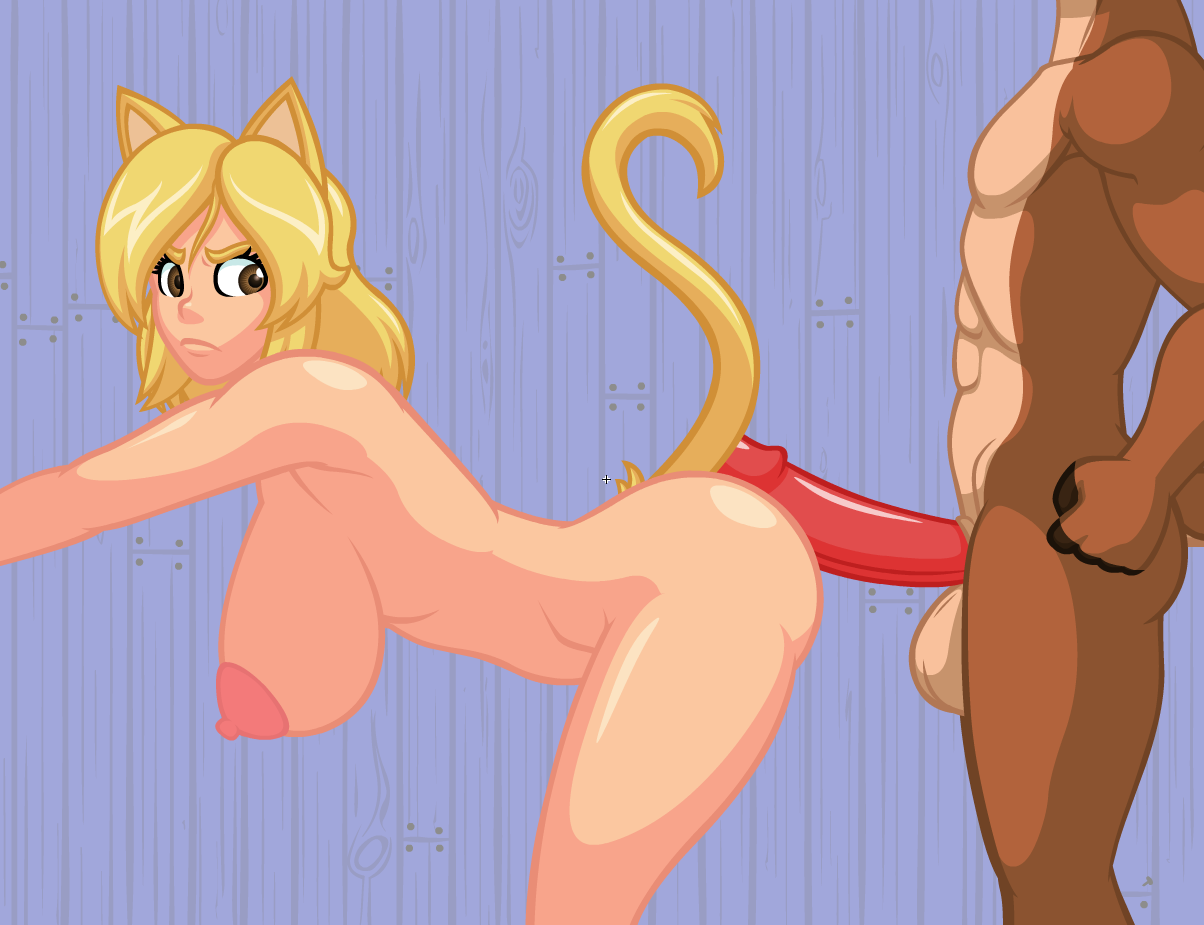 It's pretty basic looking right now, sure, but I'm sure it'll shape up as I keep working on it! I don't want to say too much about it yet! Mostly because I've got a lot of decision making left to do! It doesn't even have a name!

So ya, you can probably expect a bit of a low dip in content in the updates during these next weeks. I'm going to focus on getting all of the base animations done for this Ellie flash for now. Hope you can have some continued fun with Spectacular Spectrophilia until then!
Posted 7th of January 2019 - 00:01 by | 8 comments.
[Spectacular Spectrophilia]
It's finally released!

Play it now!
Posted 4th of January 2019 - 07:07 by | 13 comments.
Happy New Year!
I've spent the days since christmas trying my best to finish all the drawings on my to-draw list and just barely made it. Like, drawing from morning to night several days in a row. It was quite heavy on my drawing hand! So, without further ado, here's all of 'em!

Christmas Party Preparations, Ellie doing some teasing for the upcoming christmas party at the Bitch Breaker Foundation this year.
Bitch Breaker Foundation Xmas Party, A little gangbang!
Daddy's Welcome Home Piggy, a drawing that came to be only because of the lame puns.
Sissy Dog Fuck, I drew the gay dog.
Clam Snitch Tipping, a comic I drew as part of an art trade.
Fight for the Zoo, The return of the Tentacle Donut Box! Who will claim the ownership of Zoo?
Fooled by her Sweet Tooth, Look who else is also introduced to the Tentacle Donut Box.
One Drink Too Much, A New Year's present for the guy who wrote that fan fiction that started the whole Bitch Breaker Foundation thing.
Mom & Daughter Massage Parlor, Zu and her "daughter" the nympho baby now named Trixie opened a "massage parlor". Part of continuous art trading.

The thing that took the longest was probably the comic, that one was a lot of work. I don't think making comics is for me still...

Anyway, there's also a bunch of fanart to check out!

Anon buttfucks Zu, A silly drawing made by Oni Garth.


That about covers it for the art stuff.
I took your feedback about the new Ellie skincolor to heart and will be looking into changing it to something less banana-ish. I'll have to find something better soon, because I'll start off 2019 by finishing a sideproject flash involving her!

I'm also sorry about the Lollo flash still not being released! A weird bug came up that ruins the the mood quite awfully and Mittsies hasn't gotten around to figuring out what makes it happen yet.

Hopefully 2019 will be a better year for me. I'm awaiting some computer parts to fix some issues I've had for a long time, which is why I've put the Zoo Beta Scene on hold for a little while. It takes awful long to save on my other harddrive, making it very bulky to work with when you gotta wait like 10 minutes each time you save the damn thing. They sure are taking their time delivering the packages, perhaps it's because of the christmas season? It's always chaos during it.
But like I said, I'm going to work on the smaller project until then. Hope you've had a good 2018, and here's to a better 2019!
Posted 31st of December 2018 - 13:41 by | 7 comments.
Merry Christmas!
I'm not home during christmas this year, so I won't be able to post anything. I'll update you all again when I do return.